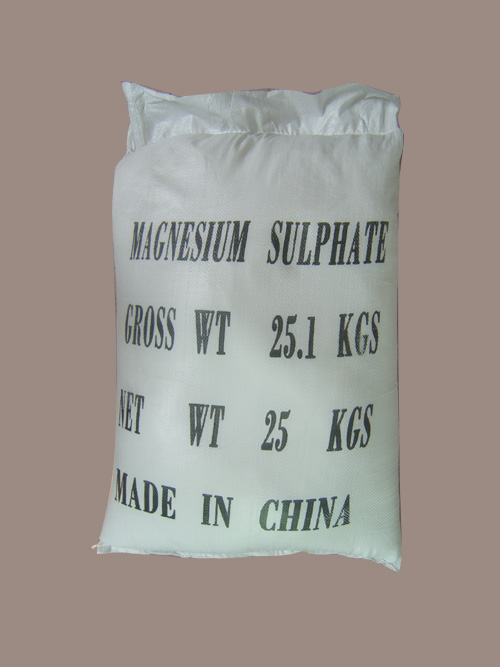 Magnesium sulfate (or magnesium sulphate) is a chemical compound containing magnesium, sulfur and oxygen, with the formula MgSO4. It is often encountered as the heptahydrate epsomite (MgSO4·7H2O), commonly called "Epsom salt". Another hydrate form is kieserite.

Anhydrous magnesium sulfate is used as a drying agent. Since the anhydrous form is hygroscopic (readily absorbs water from the air) and is therefore difficult to weigh accurately, the hydrate is often preferred when preparing solutions, for example in medical preparations. Epsom salt has been traditionally used as a component of bath salts.

Magnesium sulfate is the primary substance that causes the absorption of sound in seawater.[1] Absorption, in this case, means the conversion of acoustic energy to heat energy. The conversion is a strong function of frequency. Lower frequencies are less affected by the salt, so that the acoustic energy travels much farther in the ocean. Boric acid also contributes to absorption; but the most abundant salt in seawater, sodium chloride, has no known effect on sound absorption.

In agriculture and gardening, magnesium sulfate is used to correct magnesium deficiency in soil, since magnesium is an essential element in the chlorophyll molecule. It is most commonly applied to potted plants, or to magnesium-hungry crops, such as potatoes, roses, tomatoes, peppers and cannabis. The advantage of magnesium sulfate over other magnesium soil amendments (such as dolomitic lime) is its high solubility.

Anhydrous magnesium sulfate is commonly used as a desiccant in organic synthesis due to its affinity for water. During work-up, an organic phase is saturated with magnesium sulfate until it no longer forms clumps. The hydrated solid is then removed with filtration or decantation. Other inorganic sulfate salts such as sodium sulfate and calcium sulfate may also be used in the same way.

Magnesium sulfate is used in bath salts, particularly in flotation therapy where high concentrations raise the bath water's specific gravity, effectively making the body more buoyant. This property is also used to restore some Lava lamps damaged by being shaken by exchanging the water and adding drops of a concentrated solution until sustainable buoyancy is reached. Traditionally, it is also used to prepare foot baths, intended to soothe sore feet. The reason for the inclusion of the salt is partially cosmetic: the increase in ionic strength prevents some of the temporary skin wrinkling ("pruning" – partial maceration) which is caused by prolonged immersion of extremities in pure water. However, magnesium sulfate can also be absorbed into the skin, reducing inflammation. It is also sometimes found in bottled mineral water, and accordingly is sometimes listed in the contents thereof. It may also be used as a coagulant for making tofu.[4]

Magnesium sulfate heptahydrate is also used to maintain the magnesium concentration in marine aquaria which contain large amounts of stony corals as it is slowly depleted in their calcification process. In a magnesium-deficient marine aquarium calcium and alkalinity concentrations are very difficult to control because not enough magnesium is present to stabilize these ions in the saltwater and prevent their spontaneous precipitation into calcium carbonate.[5]

You may also be interested in the following product(s)